First, to gain intuition, let us derive the formula for quadratic equations. Consider a quadratic polynomial with complex coefficients, whose roots we wish to find:

Let us “complete the square” via a change of variables: let

The two roots in

are the positive and negative square roots:

which is the famous quadratic formula.

Having seen the derivation of the quadratic case, let us have some fun repeating this exercise for cubics! The third degree polynomial equation

Let us “complete the cube”, in analogy to completing the square as we did above for the quadratic equation.

Let us rewrite the last equation as

This is as far as we are going to get by just “completing the cube.” Cubic equations with no quadratic monomial are known as depressed cubics. So we have taken a general cubic and turned it into a depressed cubic.

Next, we can use a different trick to transform this equation into a solvable quadratic equation, as follows. Let

, so that the above becomes

We can solve this! We get

We now back substitute to find

We are done! If we want, we can simplify this expression somewhat by multiplying

We thus arrive at our final general expression, which of course must be handled with care when there are multiple roots and so forth. Recalling the definitions

the 3 roots are given by

by inserting the 3 values of

As a double check, let us consider the cubic 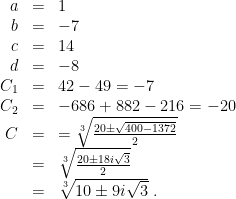 For the principal branch of the cube root we obtain

We leave it as an exercise for the reader to show that the expression with radicals above adds up to give 4 as the total answer. (See answer below for how to obtain 4, but try very hard to do it all by yourself before you look at the answer. )

The other 2 roots are obtained by taking the 2 other cube roots. If we multiply by

on the principal branch of the cube root, we get the roots

Here we will prove that

The evaluation of sums of cube roots that sum up to rationals can seem very difficult at first sight. If you are unfamiliar with such sums, try taking a look at some better known problems, such as this one here.

Now, this means that

Putting everything back together, we finally get